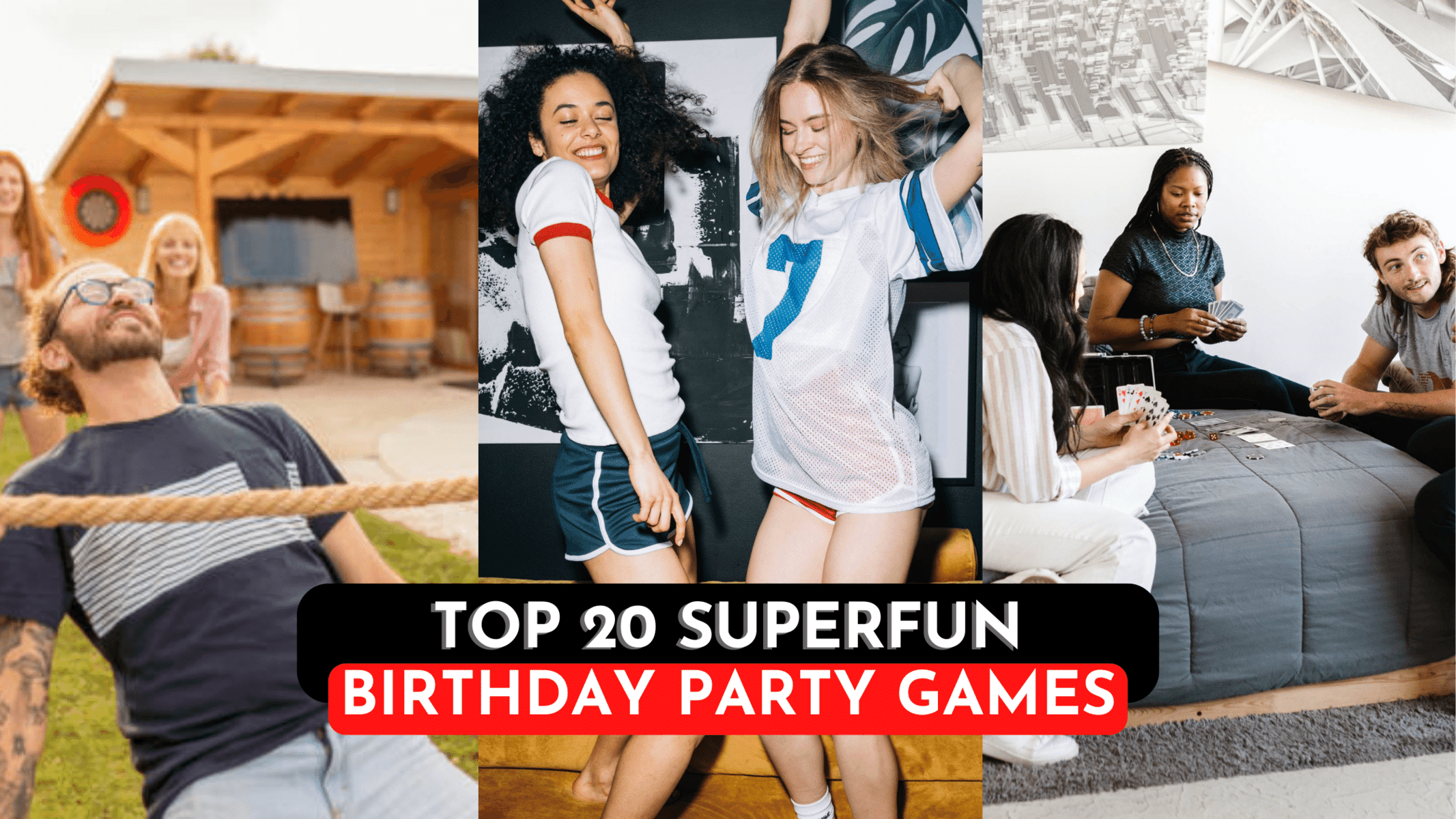 A Birthday is the time of the year to get together and have fun. Call all your friends and family members and have the perfect birthday time with these birthday party games.

Most of these birthday party games are easy to organize and don’t cost more than a dime. Some don’t even cost a dime. So, enjoy and have the perfect and fun birthday this year.

We have hundreds of birthday decorations to make your birthday even more special.

Convert your birthday party into a surprise dance contest. Have two or three people serving as judges and a kid who’d pick the songs. Yes! The contests don’t get to choose the song they’d like to dance on. You can allow them to pick the genre of their choice, though.

Limbo is one of those birthday party games that are well suited for outdoor or rooftop venues. Whoever crosses the bar at its lowest height and without touching the bar wins the game. A broomstick or any kind of stick or rod that is at least 3 feet long works well for the bar. Choose some lively music to go along with the game.

Make random pairs and let them tell what the other person would be doing in five or ten years. Have some fun questions to ask the fortune teller like how many women will someone date, etc.

This is one of my favorite birthday party games. Here is how it goes. Make a few teams and give each team some paper slips. Ask the teams to write funny things on the paper slips for others to act out. For example, one can write “frog” on a paper slip and someone will have to act it out for their team to guess that it’s a frog. Obviously, you’d know by now that teams can’t disclose what they’d written outside their team members.

Now, have the teams exchange the paper slips. One of the team members from each team will check the slips and act them out for his or her team members to guess.

The team members will have 2-3 attempts to correctly guess the thing.

Some of these questions can be:

You’ll need some time before the party to prepare for this game. Have some treasures (prizes) hidden in your home/ party venue. When the game begins, you will drop clues to various treasures once in a while. Whoever finds the prize gets the prize.

This is another fun outside birthday party game. Make a team of two and make sure that both teams have strong and weak players. Now, have the two teams stand at either side of a line.

All players will hold a rope and the teams will have to pull the other team towards their end of the line.

I’m sure I don’t need to tell you the rules. But, for the sake of it, here it is. In Hide & Seek, one person has been marked “thief”. The thief looks away while the other players find a place to hide. The thief then has to find one of the other players to claim innocence. The person caught becomes the thief and the game goes on in a loop. So, you can play Hide & Seek for as long as you want and with as many players as your guests.

Marco Polo is another endless, fun, party game. Traditionally, Marco Polo is played in ponds or swimming pools. However, it is just as fun on land. In this game, similar to hiding & Seek, one person is marked as “it”. It goes to one end of the field/pool and has his eyes shut with a piece of cloth. It shouts “Marco” and the other players shout “Polo”. It has to use its ears to locate and catch one of the other players.

Bluff is one of my favorite card games. Once upon a time, I used to play Bluff every Friday night with my siblings. You can have as many players in Bluff as you wish, though you will need multiple decks of cards as the number of players increases.

The rules of Bluff are as follows:

You can all play together or in groups of 4-7 players.

This is an easy and fun birthday party game. In this game, the birthday person has to guess all the presents before getting to open each of them. So, the game is more fun if there are so many presents.

The fun part is that anything wrapped with gift paper is a good enough present for the game. So, someone can put a potato in a box and wrap it beautifully. Now, imagine guessing the present to be something good and only to find a potato inside it xD.

A quick rule of the game: the birthday person knows which present is whose. I mean, you know which of your friends are nice or naughty. It will make guessing easier and more fun.

It’s something to play a kid’s game with your adult friends. Make pairs of guests and line them up in a short race. Each player will have one leg crossed with the other person in the pair, so they run with three legs, together. Imagine how many of the pairs will fall before making it to the end of the race.

This is the perfect summer game. You’ll need an outside venue and some time to make water balloons before the party.

To play this game, form two straight lines, with teammates facing each other. Then, have each player take a big step back from their teammate and toss the balloon to them. The opposite player must catch the balloon without popping it. If a balloon pops, that team is out.

We used to have this fun game on our annual days in my kindergarten. In this game of race, each player is given a spoon with an egg in it. The player can’t touch the egg and must make it to the end of the race line before everyone else without breaking the egg.

This is one of the easiest birthday party games to organize. Why? Because this game does not require any props or preparations, only the players.

To play the game, instruct the guests to do something with the catch that they have to do the opposite in order to stay in the game. For example, if you raise your right hand, the guests must raise their left hand and do so quickly. You’ll quickly start to see the number of players getting smaller and smaller until the last man standing.

This is the classic kids’ game also known as “Kauwa Ud” in Hindi. In this game, all players sit a circle. The size of the group can be as large as the circle can accommodate everyone’s hand long enough to have a finger on the centerboard.

Vice versa, if the announcer says “crows fly high” and someone fails to lift his/her finger is also out.

The classic game of tag can be played with any number of players. Also, the larger the group size the more fun it is.

To begin the game, one has to be “it”. It is blindfolded and counts down from 10 while other players run away from it. After that, it has to chase and touch any player to tag him/her. A tag makes the tagged player “it” and the game continues endlessly.

This is a fun surprise game. In this game, someone walks into the room and shouts “The floor is lava!” Everyone has 5 seconds to get off the ground in any way possible. You can jump on the bed, take your feet off the ground if you were sitting on a chair, or climb to your nearby table. At the end of the 5 seconds, if anyone has any contact with the ground, they lose.

You know the drill, right? Have one less chair than the number of players. Start the music and everyone dances around the chairs until they hear the music stop. As soon as the music stops, everyone rushes to grab a chair fast. The last person standing is out.

Now, you can remove one more chair and play the game on loop until the last man standing.